After 15 years, we were able to hangout again, out of town, on a weekend! Months before the wedding, my high school friends had been chatting on Facebook and planned to have a get-together. Two of our classmates from abroad were coming home for a wedding celebration. Ruel, one of my high school buds, was getting married! We all got invited to join the trip to Zambales, however, at some point, I was the only one who was able to go. My other high school buddy, Dennis, fetched me in Quezon City after work and we were all set to head to our destination. He was driving with his family whom I was very happy to meet. The last time, I saw Dennis, we were still in our high school togas and now, he has two all-grown up daughters taller than me! LOL. We had to make a stop in Bulacan to pick up Alberto's family. Alberto is another high school friend, but he could not come due to steady work in South Korea. I met his wife and lovely 6-year-old girl, Amor though. After we had some snacks, we continued our journey to Masinloc. Along the way, our vehicle broke down in the middle of NLEX! Somewhere before reaching Subic, we had a short while waiting for help to come. Good thing there was a patrol and they were obliged to aid Dennis to fix the car. 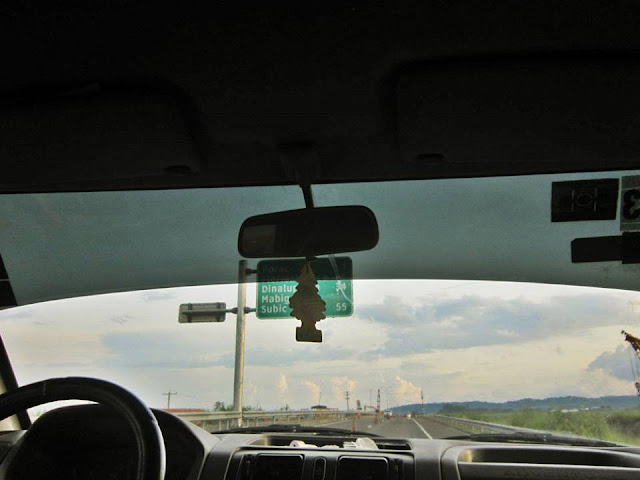 We finally arrived at Ruel's place in Masinloc at around 9 pm. There were many guests in their yard and there was someone singing along with the videoke. We were welcomed by their family and relatives. But we were so hungry, so we were lead straight to eat our dinner, LOL. Afterwards, we joined Ruel's booze friends and around midnight we were accompanied to our room at a villa nearby.

The next day, we all needed to prepare for the big event in the afternoon. Dennis' daughter, Dhenzell and Alberto's daughter, Amor were with Ruel's wedding entourage. They both looked very cute on their royal blue dresses. The time came when we witnessed the exchange of vows and we were  already at the San Andres Apostol Parish church, (popularly known as Masinloc church). The couple looked vibrant the whole while and guests were all smiles.

The reception was held in a restaurant near the villa we were staying in. We still had time to take photos with the 19th century Baroque church at the background.


After both the wedding and reception, we headed back to the villa and rested for a while. In the evening, there was an after-party celebration. It was a night of unlimited alcohol, lol. Although, we drank too much that night, we were able to wake up very early in the morning the following day. We planned to be on the road to Manila by noon but we had an unexpected idea to go to the beach, haha!

The drizzling rain did not stop us from having a beach party, lol. We ran like kids when we got there, seeing that we owned the beach. And f course, they brought a lot of food and hard drinks.

We stayed and enjoyed each others company until we decided to go home. We left and parted ways around late afternoon.