It was our much-awaited summer break from work. My friend Gale and I finally decided to unwind somewhere a bit far from Manila. On our last day in the office, our backpacks and stuff were already prepared. We took the bus to Mauban, Quezon at dawn and we arrived at the terminal at around 9 am and hurried to catch the 9:30 am boat trip to Cagabalete island.

We reached the island after an hour, including the time we waited for more passengers. Many boatmen tried to convince us that they'd take us to our destination but we'd read enough blog posts LOL. So, we trekked going to the other side of the island. We passed through a village and just asked some locals how to get to our resort. When we reached an open field, we were walking along with some other people getting to their resorts. The hike took us 20 minutes to reach Villa Noe. 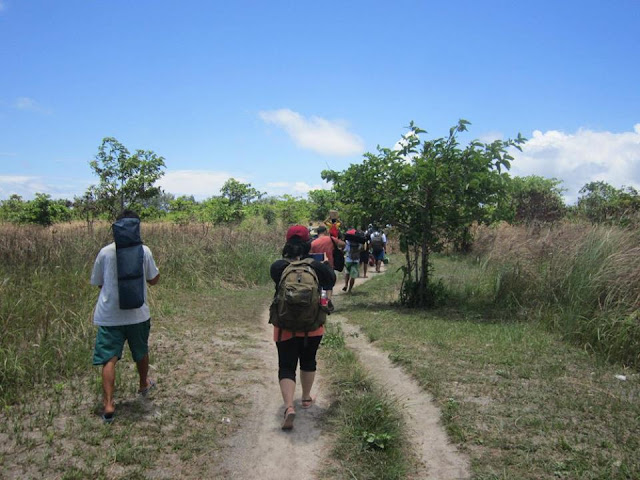 When we got to the resort and after paying our dues, we found a perfect space to pitch our tent. It was a sunny day and it felt so nice to be at the beach again. We also partly owned the beach at that time since there were only two other pitched tents there. We actually just idled until noon until we decided to have our lunch.

It was low tide and it was the best time to see Bonsai island, somebody told us. We braved the scorching heat of the sun and walked to check out the site.


Despite the heat of the sun, we just took our time to walk. After around 15 minutes, we saw the bonsai-like mangrove. On the other side, there were big rocks and boulders. Of course, we took some pictures of our 'dyesebel' pose, lol. 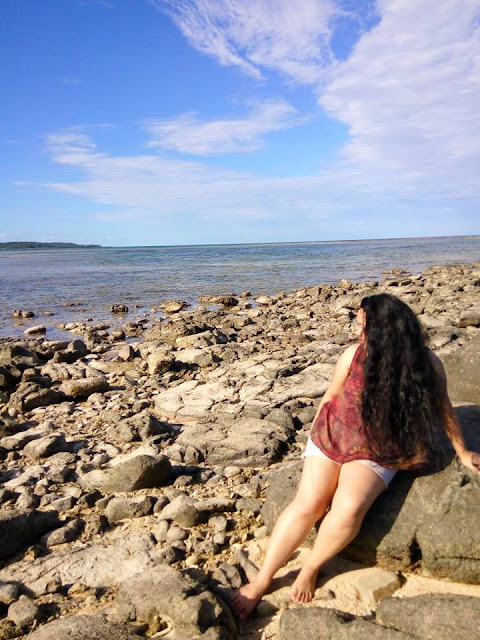 It was already late in the afternoon when we got back to the resort and we just spent our time relaxing on the sand, listening to music, laughing, taking a dip in the water, talking about what to do next and so on. Some people who were staying at the resort also came to greet and talk with us and we won't forget that we were thought of as a couple LOL. If we are, why the hell they care?! Anyway, that was really funny! Then evening came, we ate our dinner at their cozy canteen. We stayed there until we got tired then we went back to our tent and dozed off to sleep. The next day, we did not plan to do anything special but we just agreed to hire a boatman to Yang-in!

After we had our breakfast, we hopped on our boat and headed to the famous sandbar. The boatman took us first to a mangrove strait and explained a little how the mangrove sanctuary protect the shorelines of the province. Then, we continued our route to Yang-in and when we got there, we were astounded and dazed by the beautiful sight before us. The water was perfect, chest-deep and crystal-clear. The sand had a fine feel on our bare feet. There were no other tourists at that moment. We owned it. It was like a paradise! Our boatman told us we can stay there until the sandbar becomes visible. It was only around 10 am and they say we'd see it at noon. Daaaaaaaaaaamn. We could swim all the sea we wanted, lol. That's totally fun!


Gale practiced her beginner swimming skills while I did a thousand floats, looking at the sky and facing the sun HAHA. We did not mind about being sunburnt, all we cared about was the sea. We were so in love with Yang-in! We did not notice about the time and almost forgot about the sandbar until our boatman informed us by pointing at the view. There was a long stretch of rippled white sand from afar and it was very nice sight. So we walked for a few minutes to reach a mangrove tree and a small hut.


We were a bit sad to say goodbye to the island by the time we had to return to our resort. However, we were feeling a little hungry. It was already almost 1 pm when we got back. After we did our toiletries, we went to the canteen to have lunch but unfortunately, the cooks were out. So, we walked along the bay to find a place to eat. We found a small beach bar and it was a good thing that they cook food for lunch. It was too hot so we also got ourselves "halo-halo" drinks.

We took a siesta back at the resort and used the hammocks there. Then, we idled the rest of the day at the beach. We lolled and loafed, in a good way - lol, until the next day to watch the sunrise. It was such a wondrous spectacle. I wish that mornings are the same in Manila.