We assembled at Mcdonald's Teleperformance EDSA at noontime and had our lunch together. Present were my officemates; Elle, Rose, Ellie & Barbie along with our friends, Alvin & Manuel.  We planned the trek a week before and packed a lot of things in our backpacks including our food, water, sleeping bags & tents. We took the bus from EDSA bound to Tungko and because of the traffic, we reached Jollibee Tungko at around 2pm. We were about to meet Louise there but she was stuck in a traffic and said she'll meet us at the Licao-Licao jump-off. After they bought some snacks, we took the jeepney to Licao-Licao. When we reached our destination, there was no signal and it was difficult to contact Louise. We stayed for a while at a carinderia to wait for her and after a few minutes she arrived. We started to trek around 3:30 pm and unfortunately, we were held off for a couple of minutes. There was an ongoing protest and some activists were on the road blocking the way. They told us to register and donate money for the cause. We were also asked to attend a briefing of their protest. It was okay, we understood the cause so we stayed but we needed to go! They were farmers fighting against the commercialism of the mountain properties. Good lord, we were dismissed and off we continued our trek!

After 30 minutes of walking, we reached the barangay hall. We got confused because we were asked to register and pay again but we paid anyway. The trail was easy and gradual and it did not require us to hire a guide. There were several hikers and bikers heading back. But of course, we still needed to rest a couple of times to catch our breath and drink water. The trail was easy but our backpacks were heavy. LOL. One thing we really had fun about was taking a lot of silhoette photos against the sunset.

We were 30 minutes away from the campsite and summit, when we needed to stop to see the sunset view atop Mt. Balagbag. 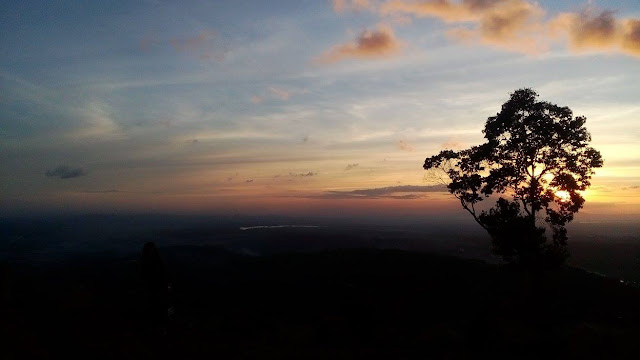 It was already nightfall when we reached the site where we had to pitch our tents. And the following day, we were in awe of a view of the Sierra Madre mountain range.