Staying in Buscalan is one of my favorite things I did in my entire life! I planned to go solo but then change is the only constant. I went there with a travel buddy, Manuel. We took the 9 pm bus trip from Coda Lines, Cubao, Manila to Bontoc, Mountain Province and tried very hard to sleep through the night. However, it was a long and winding road trip for 9 hours.

At around 7 am we were already in Bontoc and looked for the bus or jeepneys bound to Tinglayan, Kalinga. We walked to MPSPC (Mountain Province State Polytechnic College) and there was a bus waiting next to it, bound to Tabuk, loaded with many passengers. The bus conductor suggested us to be on top load but Manuel instantly hesitated and disagreed to do it. I got a little upset in my mind and very disappointed thinking of the time we'll be wasting to wait for the next trip at 2pm. While my companion was all cool and just decided to eat his breakfast at an eatery across the bus/jeepney stop, I was praying to have an alternative route. I called Gilbert, our contact in Buscalan for suggestions. He said if we missed the first trip, we should not miss the next one at 2pm. It's the only way to get there. Several minutes later, the clouds parted, a jeepney driver offered to take all backpackers straight to the Buscalan Turning Point but we had to wait for more passengers, so we did, and passed time watching an ongoing town parade.

Waited for almost an hour, so we all agreed to hire the jeepney and share the fare. At around 9:30 am, we were on our way to Buscalan. I thought it was just a short trip but it took us an hour and a half hours of narrow, steep & zigzag roads which on the other hand offers a majestic view of mountain ranges and rice terraces.

Then, I suddenly imagined if we were on top load, it would be scary and dangerous, knowing that the driver was driving fast and furious. LOL. I was becoming sleepy already, all due to the sun's heat and wind breeze, when the driver announced that we're finally arriving at the turning point. It was not difficult to find Gilbert, as he promptly introduced himself to us and his younger cousin, Steve. Gilbert also introduced us to a young couple, a Filipina and a French guy tandem, I forgot their names.


So we trekked altogether and I thanked God for Steve, he carried my backpack and assisted me through the steep parts of the trail. It was getting very hot at 11 am, right in the middle of the trek, they decided to rest and take a dip in the waterfalls for a few minutes but I didn't want to get my feet wet. Back on the trail up, I rested a few times to catch my breath and drink water.


And alas when we finally reached the village, we registered and paid for the tourism & environmental fees and off we went to our homestay.


Steve showed us around the village on the way up to where we were going to stay. The village was quiet at noon. There were faint sounds from pigs and chickens roaming freely around. There were small groups of young and old people sitting together doing their own chores. Steve taught me my first Butbut dialect phrase, "Wayu Ercao" which means "Good Afternoon" and I tried it on anyone I met along the way. I was greeted the same with smiles.

Reaching the farthest part of the village, we entered a gate which seemed to be the last house. It's like a small cottage that faces a view of the rice terraces and mountains, the sight of it was very nice, peaceful and relaxing. There was a Filipino couple, whom were also our lovely housemates for a few days, greeted us happily. They just finished their lunch and were already cleaning up when we got there. She explained that I can just buy something to cook and there is plenty of rice. After feeding a little boy, they went out to visit Apo Whang Od.

I was starving already but we did not buy any food to cook from Bontoc, so I just bought some instant noodles, eggs and luncheon meat from the store nearby so that it will be quick to prepare. Steve prepared and gave us Kalinga coffee too.


After we ate our lunch, we lounged and relaxed the whole afternoon at the balcony upstairs, which where we also had our beddings placed with our mosquito net. Steve and Gilbert asked me if I wanted to get inked that afternoon, who I wanted to get the "batok" (hand-tap tattoo) from and which design to put. I decided to have my :batok" done with Apo the next day. I just wanted to chill after a long journey. Steve recommended Selma's eatery for dinner that night. We were very glad to know there's a place to eat in the village! Selma was a vibrant woman of my age. When we returned back to the homestay, our housemates prepared food for dinner and had Grace, (Apo Whang Od's granddaughter and apprentice) and some locals join. We also met our host, ate Josephine, who was a very cheerful woman. That night we had a bonfire set up in the open field near Gilbert's house and enjoyed each others company with story-telling, laughter, getting some irie feel, beer sessions and Kalinga folk songs. Nothing compares with the nightlife in Buscalan!


The next day, I woke up early to get ready for my "batok" session with Apo Whang Od and I made up my mind that I was going to get the Serpent Eagle symbol. Steve, of course, was there to accompany me for the queueing. And then, there I was waiting for my turn to be hand-tap tattooed by the living legend. It was around 9:30 am and Steve said I was #5 which meant I had to wait for 4 people in line. However, in between, there were a couple of people asking for Apo' s signature. Manuel did not really plan to have a tattoo, he just wanted to check Buscalan out, lol. So he was still sleeping by that time I was waiting and then he got there exactly when it was my turn already. I was already sitting next to Apo Whang Od at 11:30 am and I was so ready and pretty excited to feel the pain of getting a "batok."


The first line tapped on my back was bearable and as Apo started to tap back and forth, along my spine through the bone, I clenched my jaw as I felt the sting of the thorn and Apo's force and pressure when tapping. Although, in pain, I managed to keep a smile on my face because there were many people taking pictures! Why? LOL. Including Manuel, who well-documented this event. I thank you, monkey.


The most painful part was her finale, the three-dot-signature. But it was over and done in 30 minutes. The serpent eagle tattoo which symbolizes heavenly guidance and protection, is now on my skin. The long and winding road that leads to Butbut tribe's village was really worth it! Indeed, it was an honor to meet and receive a "batok" (traditional Kalinga hand-tapped tattoo) from the living legend "mambabatok" of Kalinga, Apo Whang Od.


We stayed in the village for 2 more days. I enjoyed playing with the Butbut kids and the bonfire night sessions with the locals and some tourists.

I will definitely go back and right now, I still miss the vibe.

My serpent eagle hand-tapped tattoo was done by the living legend Apo Whang Od of Butbut tribe in Kalinga. They said that it means 'heavenly guidance and protection.' I thought that my tolerance for pain would have been tested again and I was awed that the tattoo was done only in 30 minutes.  The thorn tapped on my skin stung like enormous bees but it also felt great, lol.


I felt honored and favored by the universe to be tattooed by the last 'mambabatok' of her time. I would definitely try to go back and visit the village soon.

Friday - June 1, 2018
At around 5 o'clock in the morning, Liezah and I were already on our way to the bus terminal. We took a Grab since we were aiming to get there by 6, from Sta. Mesa, Manila to Mandaluyong then to Trinoma, Quezon City. We got there earlier and waited for a few more minutes before the bus finally left the station. Our airfare via Philippine Airlines PAL was booked months before and there were no direct flights from Metro Manila to Basco. Conveniently, there was a direct trip from Manila to Clark International Airport, Pampanga. The bus fare only costs 250 per person and the travel time is for 1.5 - 2 hours. Our friends, Anya and Joy were also on their way to the airport coming from Davao and Valenzuela. We arrived at the… 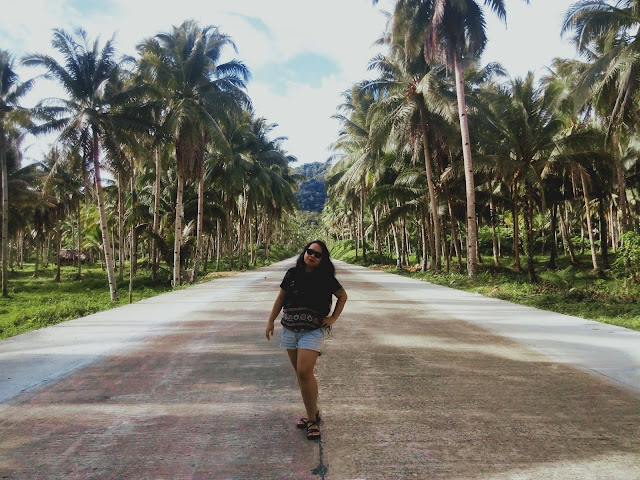 We talked about visiting the islandright after our trip to Batanes 4 months prior. By chance, my friend was able to book a promo flight. We were also preoccupied with our own jobs so we really did not have much time to make a gameplan, lol. However, we did our duties to research about the whatabouts on the web and learned that we had to book an accommodation in advance since it would be hard to find available rooms. We both agreed to stay at Point 303 located a few yards away from Cloud 9.

On our first day, we set off at around 5:30 am to travel to Clark Airport from Manila. We arrived in Clark, Pampanga at around 8 am and we were already hungry so we checked in and ate our breakfast. Our flight at 10:35 am was not delayed and in an hour and 45 minutes we were already in Siargao. It was raining hard when we reached the airport, we were were a bit disappointed about the weather then. Eventually, while on the tricycle to General Luna, the rain stopped. The ride from the airport to our …