At around 5 o'clock in the morning, Liezah and I were already on our way to the bus terminal. We took a Grab since we were aiming to get there by 6, from Sta. Mesa, Manila to Mandaluyong then to Trinoma, Quezon City. We got there earlier and waited for a few more minutes before the bus finally left the station. Our airfare via Philippine Airlines PAL was booked months before and there were no direct flights from Metro Manila to Basco. Conveniently, there was a direct trip from Manila to Clark International Airport, Pampanga. The bus fare only costs 250 per person and the travel time is for 1.5 - 2 hours. Our friends, Anya and Joy were also on their way to the airport coming from Davao and Valenzuela. We arrived at the airport at around 8 am and Joy was already there. Anya had a little difficulty getting there, but when she arrived, we checked-in our backpacks, paid some fees and went to the boarding area and ate our mini breakfast. Anyway, we were all happy and excited forasmuch as we dreamed to see and experience Batanes, now it's within our reach. Our flight was scheduled at 10:50 am but for some unknown reasons, we departed at an earlier time. We arrived in Basco at around 11:30 am and we were already hungry, LOL. We registered, paid for the environmental fees, got our backpacks, then a staff from Casa Feliciano, our booked accommodation, welcomed us and took us to our homestay.

It was noontime and it was already scorching hot. After settling our things at Casa Feliciano, Kuya Romnick, our tour guide was just on time to pick us up for lunch! YAY! We had our lunch at Beehan's Meals and Snacks, afterwards, we started our North Batan tour. We were a convoy of two tricycles for the tour, Liezah and I were with Kuya Romnick while Anya and Joy were with Kyaah, lol. (I forgot his name.)

Kuya Romnick volunteered to take our pictures and we were not disappointed. They were all very good photos! We went to Mt. Carmel Chapel, a small church on top of a hill, overlooking the mountains and villages of Basco.

We headed to the Radar Station, the northernmost station of PAGASA in the Philippines. Kuya Romnick said, there was a dome on top of the building but it was destroyed by a violent storm. We were also privileged to visit Fundacion Pacita, which is a boutique hotel with featured artworks and picturesque gardens.

On our way to the Dipnaysupuan Japanese Tunnel site, Kuya Romnick asked for our issued maps. We didn't know that we had to bring it with us during the tour for stamps, but we were able to get in still because of him. He said that the tunnel was built during the time of Japanese occupation. There was a stairway heading down to darkness, which also looked eerie. We were asked if we wanted to check it out but we refused and just continued to walk through the end of the tunnel. On the other side of the tunnel, there was a majestic view of Mt. Iraya, an active volcano.

Kuya Romnick took us to a beach which is called Valugan Boulder Beach.  I just found out that Valugan means "east" in the Ivatan language, hence its location is in the eastern side of Batan.
The beachside is covered with stones and countless boulders. We enjoyed the sound of the waves and the cool breeze against the afternoon heat.

Soon after, we headed to Our Lady of Immaculate Concepcion Cathedral, the first parish church built in the 18th century. We made a short break and bought some snacks and drinks at a store we passed by then continued with the tour. We were very thrilled to see the Basco Rolling Hills! We had to do a short trek to the top and of course, we had a lot of photo op there.

It was already late noon when we went to our final destination of the tour. We were really looking forward to see the lighthouse because of Alessandra de Rossi's indie film entitled "Sakaling Hindi Makarating" lol. Finally, we were standing in the middle of the lighthouse and, now defunct Bunker Cafe. Both were situated atop Naidi Hills.

We also stayed there for a while and waited for the sunset. Looking at the setting sun in the northernmost part of the country, facing the Pacific Ocean was surreal.

After our tour, we headed back to Casa Feliciano to rest and decide where to eat dinner. At around 8 pm we resolved to eat at Jino's East Pizzaria. The streets were all half-lit but we just walked and asked around where the pizzeria is. It was just a few blocks away from the homestay and the ambiance was cozy. Later on, after feeling satisfied with our pizza and pasta, we went back to our homestay and retired for the day thereafter.

The next day, we woke up early to prepare and be ready for our South Batan Tour. Kuya Romnick reminded us that they'll be there to fetch us by 7 am. We ate our breakfast prepared by Casa Feliciano and then waited for them to arrive. First stop for the day was the Chawa View Deck -- it faces the West Philippine Sea and there is a nice view of steep mountain cliffs.

Afterwards, we went to the boat shelter. Mahatao Shelter Port is a refuge for all boats during the stormy season. Then, we continued to see the lighthouse.  The sight of Tayid Lighthouse facing the serene waters of the Pacific was so gorgeous.

Later on, we headed to Racuh a Payaman, also popularly known as Marlboro Hills or Marlboro Country. It is a series of slopes and hills with a couple of goats and carabaos grazing in the meadow. It was windy, and only during times like this that I enjoy being uncovered from the blistering heat of the sun, lol.

We stopped by a church in Imnajbu, Uyugan named San Lorenzo Ruiz Chapel. Kuya Romnick said that the first Christian mass in the province was held there in the 1600s, marked by a wooden cross. Shortly, we went through the Alapad Pass where there is a sequence of hills, edgy cliffs and rock formations overlooking the Imnajbu Beach.


In Ivana, we visited the famous Honesty Coffee Shop and we "honestly" bought some souvenirs, haha. Then, we checked out the House of Dakay, the oldest stone house in Batanes and the Ivana Tuhel Bridge, which was built during the Spanish colonial period. Before lunch, we dropped in San Carlos Borromeo Church and we registered for our side trip to Rakuh-a-idi Spring.

Finally, we had our lunch at Paulvana's Canteen and I can say that the food was superb and worth the price! The last activity that we had in line that day was to go swimming. We did not really plan to go there but since it's also along the way, we pushed through with it. To reach the spring, we had to trek for 15 minutes. There were a couple of kids swimming when we got there. Nevertheless, it did not stop us from taking a dip in the pool.

That concludes our South Batan tour and we headed back to Casa Feliciano to rest. We went out at night to find somewhere to eat. We tried looking for Hiro's Cafe, however, we found Hudzan's Cafe  instead which was also perfect timing because they were all craving for lobsters.

The following day at Casa Feliciano, we just took our time having our breakfast and packing our things while Liezah went to the shops to buy some take-home gifts and souvenirs. Although it was just a short vacation, we really enjoyed the simple and peaceful vibes of the province. I am also hoping to visit the neighboring islands, Sabtang and Itbayat in the future.

Here is a sample budget breakdown plus the promo seat airfare: 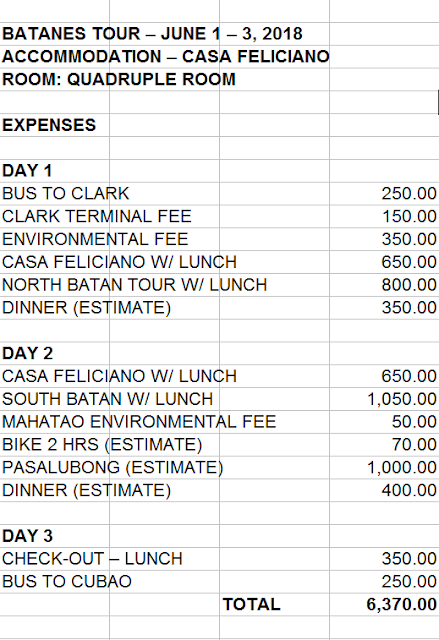