Taiwan - The Heart of Asia


Last year, Taiwan announced its extension of visa-free privileges for Philippine passport holders until July this year. My friends and I were able to purchase promo tickets a couple of months before our booked flights. I did not have my new passport then. We were so confident that I would be able to obtain it very quickly since there were months ahead of time. Actually, I had a traumatizing experience when I renewed my lost passport with DFA Megamall branch. I won’t go into full details but the processor asked me to amend a document which requires a lot of money, months of court proceedings and it could possibly take a year to complete. It still confuses me why he required me to do that when it should not be a problem since I have consistent and transparent documents intact. I even consulted a lawyer and he commented that some employees are just making their own rules at the bureau, then advised me to retry my application through the main office. For months, I really felt stressed and doomed but we just hoped and prayed for a smooth transaction. Thank heavens, my passport was granted and processed in DFA Aseana, without any questions! My new passport with 10 years validity got released and delivered a month before our Taiwan trip. WHEW! Lesson learned: do not book a flight ticket without a valid passport but I did it anyway! LOL. Moving forward to the day of our flight to Taiwan, we were all feeling prepared, ready and excited. In fact, our dear friend, Liezah arranged pretty much of everything - from booking air tickets to hotel accommodation and organizing van transfers to budget tours.  Sounds convenient, right? Haha.

We arrived at the NAIA airport around 4:30 am, I was with Liezah, Zeus & Maan with their two kids, Zui and Zian. Yvette came a bit late but we managed to finish all queues in 2 hours, lining up for the travel tax, check-in and immigration counters. Anya and Joy were already waiting for us at the boarding area since they came earlier, all the way from Valenzuela and Davao. Our departure time from Manila to Taoyuan was at 7:30 am and to our disappointment, Cebu Pacific Airlines announced that it was delayed. Awfully, we had to wait and idle for a while. We took off at around 9:30 am and in 2 hours, touched down Taiwan. At the airport, we rented our Wi-Fi devices and had our money exchanged to Taiwan dollars. Although it started to drizzle, we had a convenient van transfer from the airport to the hotel, courtesy of Freda, which only took a 45-minute-drive from Taoyuan to Taipei. We just checked in and dropped our things at Hedo Hotel before heading out to eat lunch.

We decided to eat our lunch at the famous “poop restaurant” Modern Toilet. From our hotel in Kaifeng, Zhongzheng District to its location in Wanhua District, it's supposed to be a 10-minute walk. However, we got lost going around similar streets for 40 minutes and by the time we discovered where it was, we were already starving. At this point, we could literally eat anything. The food, theme and ambiance of the restaurant was really interesting and we enjoyed our poop and pee themed meals, LOL.

In the afternoon, we planned to see the Chiang Kai-shek Memorial Hall and Taipei 101, then the weather got rainy, cold and chilly. Nonetheless, it didn’t stop us from going. They all had their rain proof hoodies and jackets, I did not so I got myself an umbrella from 711. We walked back to the main station and bought our Easy cards and took the MRT, as it was also the most convenient way for us to move around Taipei. Minutes away from the station, we were greeted by the great looking National Concert Hall and a few yards from it is the popular Chiang Kai-shek Memorial Hall. I was impressed with the architecture of both structures.

Eventually, it rained harder so we agreed not to go in for Taiwan 101 afterwards. Instead, we headed back to our hotel to rest and idle for a few hours before dinner time. At night, we checked out Ximending District. Indeed, it was Shining, Ximending, Splendid haha. There were lots of shops and restaurants to choose from. Consequently, we went on our separate ways, trying street foods, buying and checking out stuff at different stalls. Most importantly, Yvette and I found our way to a local bubble milk tea shop! We love Mens Uno Cafe.

Basically, that concludes our first day in Taiwan. It was very tiring because we had to do a lot of long walks in the heavy rain, but then it was all fun. On our second day, Freda, our local contact, drove for us to Taichung, which is located in Central Taiwan. It was a 2-hour drive from Taipei City. Amazingly, the weather was very nice and clear! We visited the hippest and picturesque spots in Houli and Nantun Districts, specifically the Zhongshe Flower Market and the Rainbow Village.

Of course, there were a few excitement bummers in the trip. One of the main reasons why we went to Taiwan is to visit the fictional Yingde University. In our minds, we were set to pay a quick visit to Chiayi that day and for a while, Freda hesitated to take us there. We didn't know why she was acting weird, knowing that we already had that deal beforehand. She even suggested other places but we were not interested. Ultimately, she gave in and agreed to take us to Chiayi, HAHA. The travel time was an hour and a half. When we reached our destination, we were already hungry and had our lunch at 711 near the campus.

As fans of the popular Taiwanese TV drama in 2001 - Meteor Garden, we visited F4's Ying De University. Meteor Garden was the first Asian drama dubbed in Tagalog and I think the show started the Asian drama trend in the Philippines. Anyhow, the real film shoot location was in National Chung Cheng University, it's an open university in Chiayi. Personally, I felt content and nostalgic as we totally relived and followed F4 and Shancai's Yingde University moments, lol. The campus is very big and most of the students ride their bikes to get to their next classes.


It was already late in the afternoon when we headed back to Taipei City. We had a three-hour ride from Chiayi and we also managed to watch 2 movies then, particularly Kita Kita and Aurora. We just rested for a while at the hotel and resolved to drop by Taipei 101 before going to the Shillin Night Market in the evening. We didn't actually notice the time so we set out a bit late at around 8 pm.

We had to rush because the train closes at midnight and finding the right MRT line and station exits was very challenging. Asking the locals was not very helpful as there's a language barrier. Mainly, we felt like we were in a sort of Amazing Race Asia stint. :)) From the Main Station in Taipei to Taipei 101, we passed through 8 stations and from Taipei 101 to Shilin, we had to pass 14 stations back.

It was a thrilling experience! We greatly relished our time in Shilin Night Market where we binged on authentic Taiwanese street food. My favorite would be the wheel cake -- it's a kind of hotcake slash pizza with mozzarella, yum! But I also love their grilled meat, sausages and skewers!


To set the record straight, we were able to hop on a train back to Taipei Main Station at around quarter to 12 midnight. Before deciding to finally retire for the day, we bought some beer and midnight snacks from Family Mart near the hotel. The next day, we decided to go sight-seeing in the northern parts of Taiwan via Klook. The shuttle bus was a guided tour and also a hassle-free way to get around New Taipei attractions. Our first destination was in Yehliu, it was an hour away from Ximen, Taipei. There were many tourists around Yehliu Geopark but we were not really surprised about it. From afar, we saw a lot of people lining up to get a good picture of the famous Queen's Head. We didn't mind to fall in line for that instead we walked around and explored other areas with unique and mushroom-like rock formation. The next stop was in Jiufen Old Street, where I enjoyed shopping the most. I bought boxes of Taiwanese Mochi and Chocolate Pineapple Cakes there!  My shopping partner, Yvette satisfyingly found all of the gifts and items on her things-to-buy list too.


Afterwards, we went to Shifen where we had to walk and cross a suspension bridge just to see the "Little Niagara of Taiwan" - the Shifen Waterfalls. There were many tourists since it was Sunday, but the waterfalls look great and amazing!


Finally, we went to Shifen Old Streets where we got a sight of its old railroad tracks, flying sky lanterns, souvenir shops and restaurants on both sides of the railways.

Now, that was a wrap for our Klook sight-seeing extravaganza. Fast forward to getting back in Taipei, in the afternoon, we did a little shopping spree at the Taipei Main Station Underground Mall before heading back to our hotel. The rest of the day was free time for everyone, we did just whatever things savoring and feeling our last moments in Taiwan as much as we can.

Here is our sample of itinerary expenses: 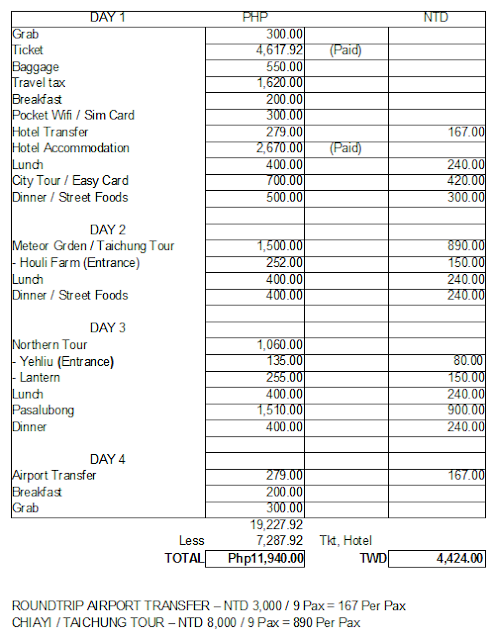